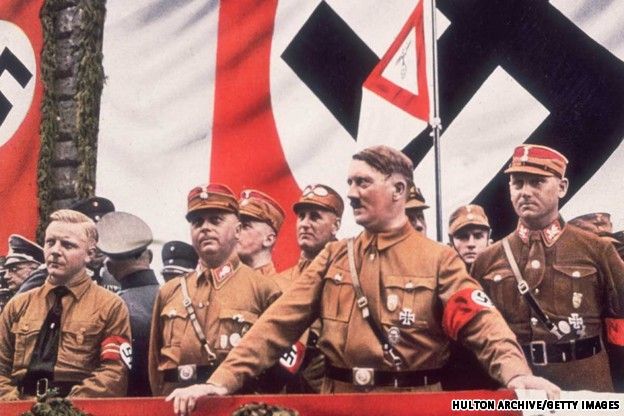 
Do you want to win friends and influence people? Naturally, we all do. So why not take some lessons from a despised master of manipulation—Adolf Hitler? That unusual, not to mention more than a little controversial, notion was the premise of the central segment of Tuesday night’s prime-time TBS Show “Let’s Put it on the Textbook” broadcast on Japanese television. Goose step to success In a twist shocking even by the often-low standards of Japanese variety show programming, the hosts enthusiastically explained how to apply the tics, tricks and mannerisms of the notorious dictator’s speeches to their own lives. Minus the conveniently ignored genocidal aspect of the Nazis, of course. “Now YOU can use the techniques Hitler used to brainwash a nation to get ahead at school, work and home!” bleats the tagline on the show’s website. Lest you get the wrong idea, “Let’s Put it on the Textbook” isn’t sponsored by white supremacists or neo-Nazis. Nor is it expounding the virtues of fascism. It’s your average studio-based variety show in the mold of many others on Japanese TV, albeit one with a historical twist. But, given how few individuals of the Jewish faith live in Japan, it’s easy for the Holocaust to seem like ancient history to some here. For example, in March, the Simon Wiesenthal Center called out the Japanese band Kishidan for showing up on MTV in Nazi costumes. Pop goes the Nazi In a world first, this week’s show also managed to mash up Nazism and J-Pop. For the segment’s climax, a studio guest applied what he’d learned to deliver a rousing speech about bubblegum-pop idol group AKB48 in typical Hitlerian sturm-und-drang. The much-quoted Godwin’s Law states that the longer an online discussion, the higher the chances of someone introducing Hitler into the conversation. Could this represent the first time it’s ever been applied to the self-help genre?
Posted by Cyn City at 6:33 PM
Email ThisBlogThis!Share to TwitterShare to FacebookShare to Pinterest
Labels: wtf of the week