Oh! Come on! It doesn't even relate to baseball in any way! lol 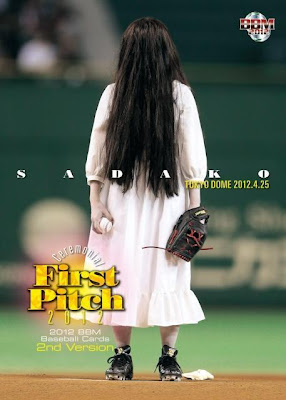 Popular Japanese horror icon Sadako from the ‘Ring‘ series, and its latest installment ‘Sadako 3D‘ has got herself her own baseball trading card, which will be released in August.

Sadako is being honored with the card because of her unique opening pitch at a regular Pacific League baseball match on April 25th. The new collection ‘2012 BBM Baseball Cards 2nd Version‘ features a total of 350 cards with the players from all 12 teams in the Pacific League, and Sadako made it into this collection like other celebrities who have thrown an opening pitch. You will be able to purchase the cards as a pack of six for 210 Yen (2.64 USD) or as a box with 30 packs for 6,300 Yen (79 USD).

Although she’s the first horror icon to appear on a baseball trading card, there have already been many celebrities honored in the same way, including Hagimoto Kinichi, Tanihara Shosuke, Lily Franky, Ueta Aya, Minami Akina, Yuuki Maomi, and Kawagoe Tatsuya.

Via Arama They Didnt
Posted by Cyn City at 10:48 PM
Email ThisBlogThis!Share to TwitterShare to FacebookShare to Pinterest
Labels: wtf of the week