What in the name of pedophilia is this?!?! . 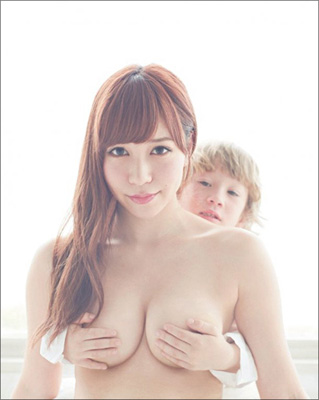 The publisher embroiled in a scandal over an “inappropriate” photo of a member pop group AKB48 may face a host of problems, reports Yukan Fuji (Jan. 13). Comic book weekly Shukan Young Magazine, which is published by Kodansha, announced on January 11 that the issue originally scheduled to hit newsstands the following day would be delayed. The problem was the suitability of including an image featuring a topless Tomomi Kasai being fondled from behind by a young boy. The magazine offered readers an apology on its Web site. “The photo contains an inappropriate expression,” read a statement from the editorial staff.

The photo in question — which utilizes what is referred to as a te-bura (or hand bra) pose — comprises the cover shot for the 21-year-old’s debut photo collection called “Tomo no Koto, Suki?” (Do You Like Tomo?), which is scheduled to be released (also by Kodansha) on February 4. A promotion for the book was what was supposed to appear in Young Magazine.

As a result, one journalist expects Kodansha to suffer a substantial monetary loss. “With a circulation of 650,000 copies, losses in terms of printing, advertising, and subscription fees will be over 300 million yen,” says Masaaki Hiruma. Publishing in recession-stricken times is already troublesome enough, continues Hiruma. “So manga comics like Young Magazine are cash cows for Kodansha,” the journalist says.

From a legal standpoint, child welfare laws may also pose problems for Kodansha. Masaru Wakasa, a lawyer and former deputy director of special investigations at the Tokyo District Public Prosecutor’s Office, says that under such statutes Kodansha is prohibited from harmfully influencing the mind and body of a child less 18 years of age through obscene acts. “In this case, a juvenile is touching the chest of an adult woman,” says Wakasa. “Kodansha did not judge this to be in violation of the law.”

The article notes that guilty verdicts for violating child welfare laws for obscenities carry a maximum prison term of 10 years and a fine of three million yen.

As to a potential violation related to child pornography laws, Wakasa says that a sex act, or possibly even a suggestion thereof, would have to be depicted. “For example, the touching of genitals,” he says. “But in Tomomi’s case, the photo does not get that extreme.”

According to a person affiliated with Kodansha, the photo project received the standard checks by staff members last year. Yukan Fuji says that the controversial image has also been pulled from inclusion in the book.

An entertainment journalist somewhat understands Kodansha’s intentions, saying that Kasai’s E-cup bust is worthy of emphasis. “It’s a shot that high-school students will find exciting,” says the writer. “However, to use the hands of a boy in order to emphasize her plumpness was a mistake.”

A spokesperson for Kodansha said that law enforcement did not apply any external pressure leading up to the postponement of publication of Young Magazine. Instead, it was simply a very costly decision that had to be made. (A.T.)

Via Arama They Didn't
Posted by Cyn City at 9:51 PM
Email ThisBlogThis!Share to TwitterShare to FacebookShare to Pinterest
Labels: wtf of the week